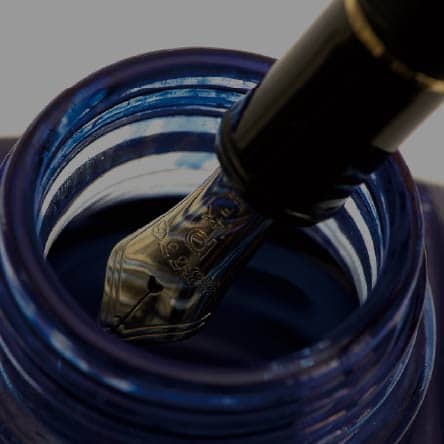 ①Blue black ink (water-based dye ink)
Blue black ink is not affected due to sunlight or humidity, and it has high water resistance, which makes it ideal for permanent records.
Initially, it had a unique feature and was initially released as an ink for long-term storage for official documents, but has been discontinued by major manufacturers.
The origin of this ink dates back to the 2nd century, and its widespread use was in the 12th century. Initially, it was made from nuts and sap, and in the 16th and 17th centuries it was used in wine and beer as a fungicide.
The current ink was established in the 19th century.
The manufacturing method uses an oxidizing effect that ferrous ions turn into ferric ions to form the color black. Thus, it is not an ink that mixes blue and black inks, and a dye or acid is added.
Hence, the blue black ink is not “bluish black” or “blackish blue”, but it is blue at the beginning of writing, but the blue color of the dye over time changes into black due to its scientific function to maintain long-term records. Only the black part of the iron that has been mixed remains on the paper’s surface and becomes black because it has become dim.
Simply put, it turns blue at first and then turns black over the years.
It can be said that the deep dark blue color is obtained with this ink.

②Color Inc(red, black etc.)
It is more alkaline than the acidity of blue black ink. It decolorizes with water and turns brown with sunlight. However, it offers beautiful colors that can't be found in other types of inks, and a variable number of colors. It dries quickly and does not precipitate due to oxidation by air.

③Carbon Black
It is made from the pigment carbon black. It does not turn brown due to sunlight, moisture. It is perfect for permanent storage of records. However, since it is not aqueous, it will not discolor once dried, so be careful when using it. 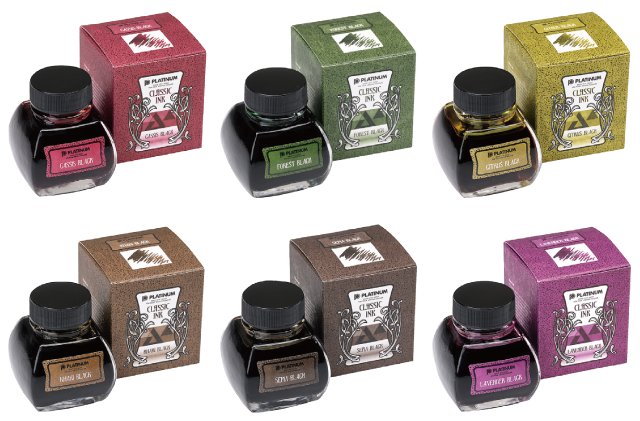 ④Classic ink (water-based dye ink)
The fountain pen ink made by traditional manufacturing method has been changed over the years to an ink that mixes dye, because the manufacturing method is special and it is not time efficient.
We are the only company in the country that continues to manufacture blue-black ink using traditional methods. The ink has a vivid dye color at the beginning of writing, but it has the characteristics of this ink that its handwriting turns black over time and has water resistance and long-term storage.
Focusing on this characteristic, "the handwriting changes to black over time”, we have produced a "CLASSIC INK" as a fountain pen ink that amuses in the process of changing color.
It also emphasizes the shading of the handwriting, so that the characters written with a fountain pen can be made more interesting. It is an ink that expands the enjoyment of writing with a fountain pen. 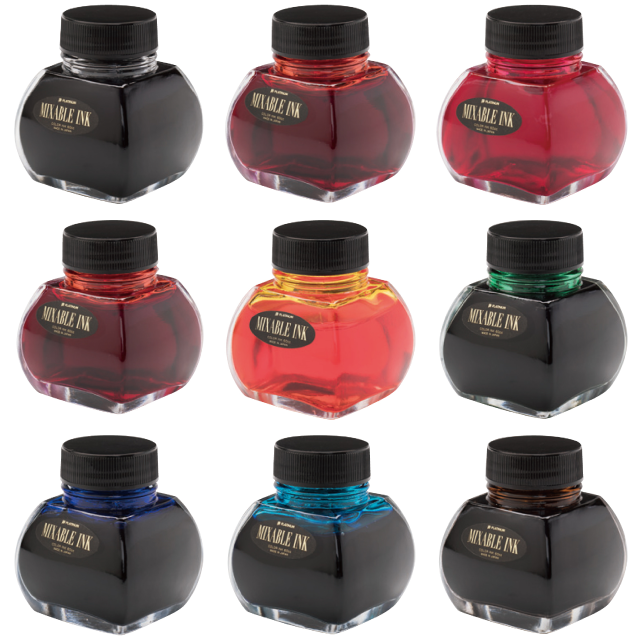 ⑤Mixable ink (water-based dye ink)
"Mixable ink," is a fountain pen ink that allows you to mix and customize your favorite colors. It is a water-based dye ink that is easy to create colors as imagined because each color is composed of a small amount of pigment.
The fountain pen ink, recommending to mix different colors is a new proposal product that can create subtle adjustments like paintings. There are many ready-made inks on the market, but when you can’t find the color you wanted, customers raised their voice and mentioned "I want to make my own color”. This was the beginning of this product development.
"Mixable ink" is based on mixing two colors of inks, and can be made closer to your ideal color with a dedicated diluent sold separately. Products that can meet the needs of creating your original color, writing seasonal letters and expressing your feelings with colors, you can share the indulgence of “unlimited color ink” at any occasion.